So I've been thinking about this space, thinking about what it is I want to write about, and how I want to do that.  I'm grateful I get to use writing as an outlet, to share how I feel about motherhood and making.  And I've decided that I'll be re-starting and refocusing that over at Motherhood Handmade starting next week.  I have loved writing here, but I'm ready for a new beginning over there.  I hope you'll follow along over there, too. The first week is all lined up and ready to go, and I'm excited to get started on Monday.

Thank you for reading here- and I'll see you at Motherhood Handmade.

This blog.  This poor blog.  I feel a little bad, and then I remember that it's just my blog.  So, as I'm still getting used to this whole school kid thing, loving the time with Rotten on his own, and working on other goals, I'm okay with a little downtime here.  Here is what life looks like right now.

I'm trying to get the home in better order, with less people in it during the day.
This shelf benefited from these efforts. 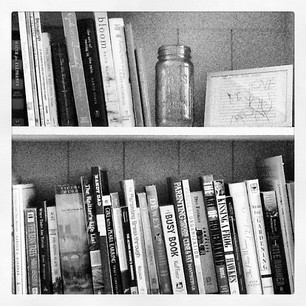 Stinky is growing into quite an artist.  This is our family portait, but today his teacher told me he tried to draw Starry Night.  So there's that. 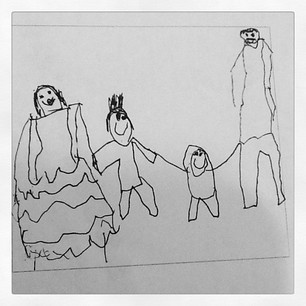 The hour before bed is the worst, but we try to make the most of it. 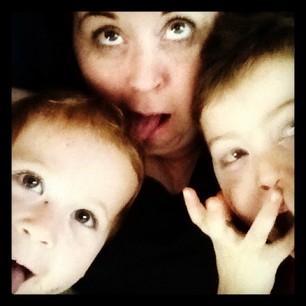 WBH and I are trying to make it through the last phase of a diet.  Sometimes it's yummy. 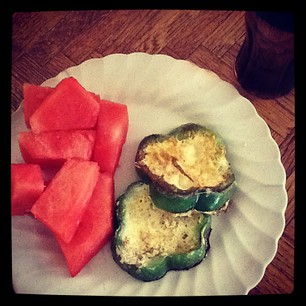 Other days I blow it and dress like a pirate at 6am for a dozen free doughnuts.
(I regret nothing.) 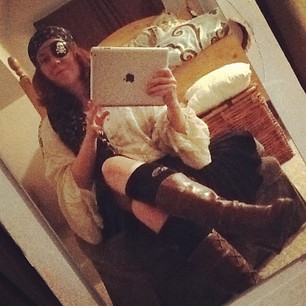 There's lots of crafting going on.  Many friends are having babies, so small gifts.  Holidays are in my mind, and I try to keep a half- hour crafty date with myself while Rotten naps. 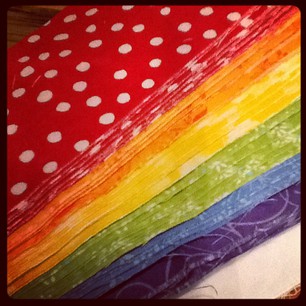 So, obviously, I have a bit to write about in the coming weeks, but this is a pretty accurate look at life right now.

Have a great weekend! 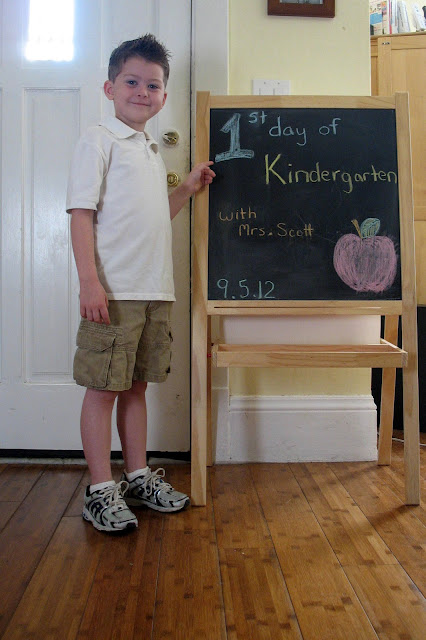 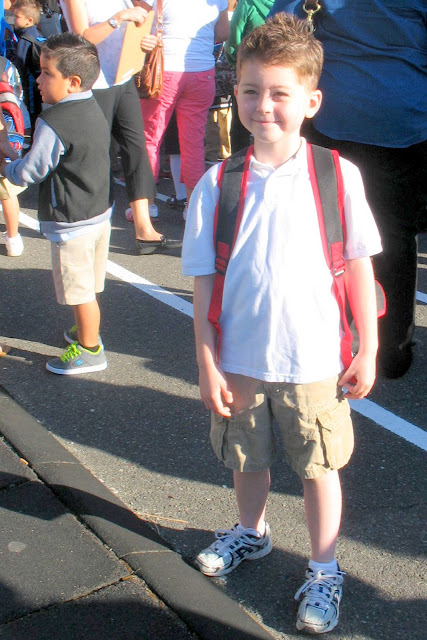 And just like that, he's a school kid now.  The first morning was full of little tells and giveaways that he was uncertain and nervous, though he told me he was not.  He asked to take his stuffed monkey to school so he wouldn't be afraid.  I told him Mr. Fuzzy-Wuzzy could ride in the car, and would be waiting for him when we picked him up.  On the drive, I heard whispers "You don't have to be scared.  I'm only going to be there a little while, and then I'll come right back to you,"  and I wasn't sure whose voice Stinky was speaking in.

We arrived at the school, where panic set in- not for Stinky, but for me.  Holding Rotten tight, and biting the inside of my cheek, I kept myself together for Stinky, who looked strangely small, especially given that his height put him at a head taller than most of his class.  Finding his class's line, he looked around nervously.  Then, as is his nature, he found a classmate from the previous days' meet-and-greet  nervously holding tight to his mom, flashed a friendly grin and shouted his name.  "Come stand with me for kindergarten!  How cool is that?!"  The boy smiled,  released his mother's hand from his death grip, and ran over to Stinky.  The two compared backpacks and lunchboxes, until the bell rang and their teacher came for them.

I kept my composure until he turned for one last look, waved, and walked into the building.  Then I had my one and only kindergarten cry in the van, took a walk on the waterfront, and bought myself some mums.    By Friday, he was asking me to let him walk from the car by himself.  We compromised with a walk to the corner, and a hug.  Always a hug. Now in full-day kindergarten, he happily hugs me at the corner, smiles at the crossing guard, and  walks into the school without looking back.
Posted by Rachael at 4:00 PM 3 comments:

I Made it Monday: Our Primary Colors Quilt 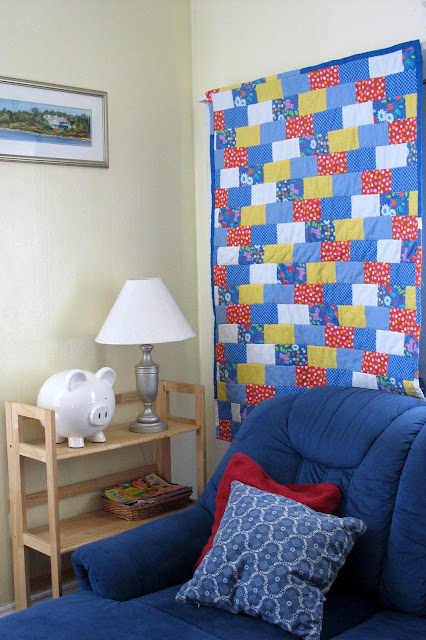 Our home was in the process of being made into a duplex before we bought it, and then someone changed their mind, leaving the home with random doors through out.  We intend to keep two of them, and the others will eventually be replaced with windows.  In the meantime, this door gets a little drafty and isn't exactly cute.  WBH asked me a while ago if I could make a quilt to hang over it.  With the best of intentions, I ordered some nice fabric, and sewed up a top.  Then I let that top sit for more than a year, unquilted.  I bought batting and fabric to finish it... last October.

So this summer, itching to sew, but not clothing, and without budget, I put the pieces together (it took me a whopping three nights.  Silly procrastinator).  WBH took down an unused curtain rod, I sloppily basted a sleeve onto the back for it, and Voila!  Hidden door.  Yes, it's very bright, but being in a climate that favors overcast skies, coming home to a cheery color scheme is something I really appreciate.   Now I'm on to a few paper projects, and a scrappy nine-patch quilt.   What are you working on this week?
Posted by Rachael at 1:00 AM 2 comments:

Labels: home, I Made It Monday, Quilt 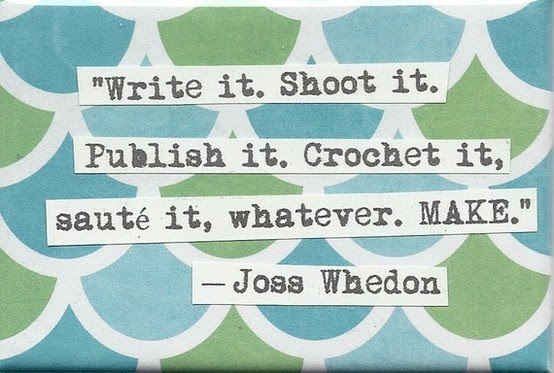 source
Posted by Rachael at 2:00 AM No comments: 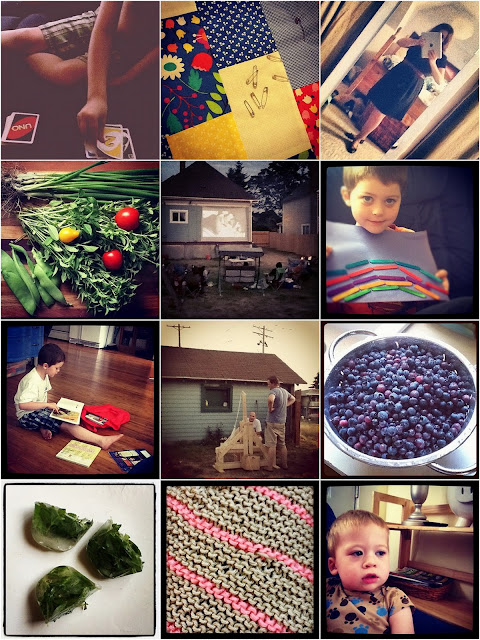 Two years ago, Rotten's arrival happened in a way that would foreshadow a lot of his personality.  When he surprised me by arriving eight days before my scheduled c-section, I kept saying to him "this was not the plan, little guy"  and when he was born, he came out yelling.  He yelled at us for an hour, as if to let us know that it wasn't his plan either.  He gave us this look for a  days after.  Somedays, he still does. 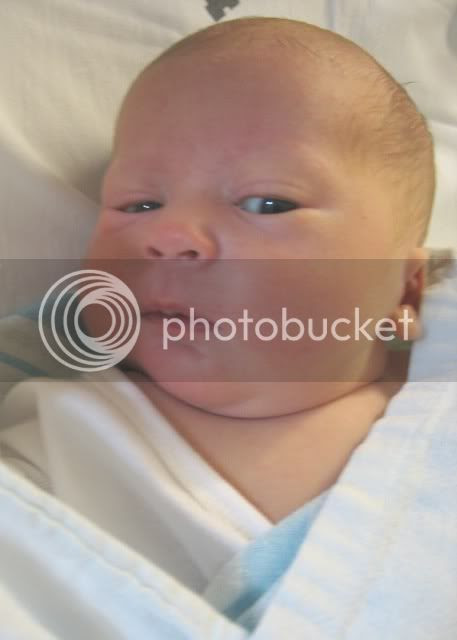 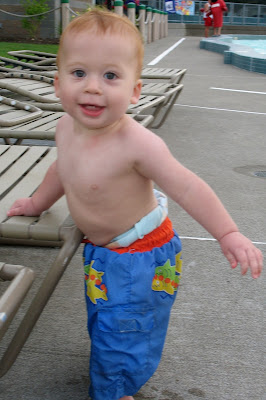 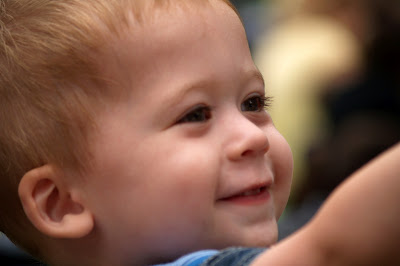 Some days you are still such a mystery to me.  The way that you live life on your own terms confounds, awes, and sometimes makes me absolutely crazy.  Still, I can't imagine you any other way.  You are so clever, so funny, such a flirt and a tease.  I'm so happy you are a part of our family.  Crazy as it can make me, I love the way you shake things up, the way you taught me that I know absolutely nothing.  I love your passion for books, the way you simultaneously adore your brother and want to boss him around.  I know that your stubbornness and drive for the things you want will someday be your greatest assets, but today, you are living up to the words you said to everyone today: "I'm two!" You bring so much joy to our family, in a way that no one else could.  We love you.  Happy Birthday, Rotten one. 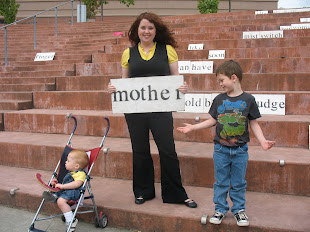